LaVonne feels she has never met a stranger because shortly after meeting someone they become friends. After sailing and exploring more than 80 countries, she is still energized by the people she meets and that attitude is felt in her writing. She embarked with her writing career late in life, long after teaching and supervising at the University of Minnesota, which she did for fifteen years. She and her husband took early retirements when their youngest entered college, at which point they purchased a sailboat and began exploring the world by sea. They sailed for six years, visiting remote villages and atolls seldom visited by outsiders.

View my portfolio to see more of my work... 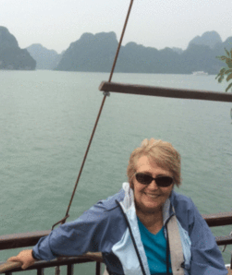 When they returned to the United States she was pleasantly surprised to discover people were interested in what she had to say: the boating community, travelers and those who lived adventure via their armchairs with a book in their hands all embraced her and invited her to their homes and clubs as a guest speaker. In 2002, ProStar Press offered her a contract to write about their sailing adventures. She wrote the book and did an oil painting of their boat for the cover. That book, “No More Mondays – a nautical odyssey” is in its second edition and available in both hard cover and paperback.
In 2014, on the one hundredth anniversary of the Panama Canal, LaVonne was alarmed to learn our school children were not taught about the Panama Canal or the impact it has had on the world. With passion and purpose she wrote the first two books in a series for young adults called, A Canal Zone Adventure Series: Book one is “Andrea,” book two is “Zeke”.
Her whimsical side can be seen in her picture book called “Seasick Ants.” The idea was born while watching large carpenter ants march up their dock lines in Cartagena, Colombia.
LaVonne has six adult children and many grandchildren. She lives with her husband and standard  poodle in Scripps Ranch, a suburb of San Diego, CA.